The Glyphosate Spectacle - Energy For Living 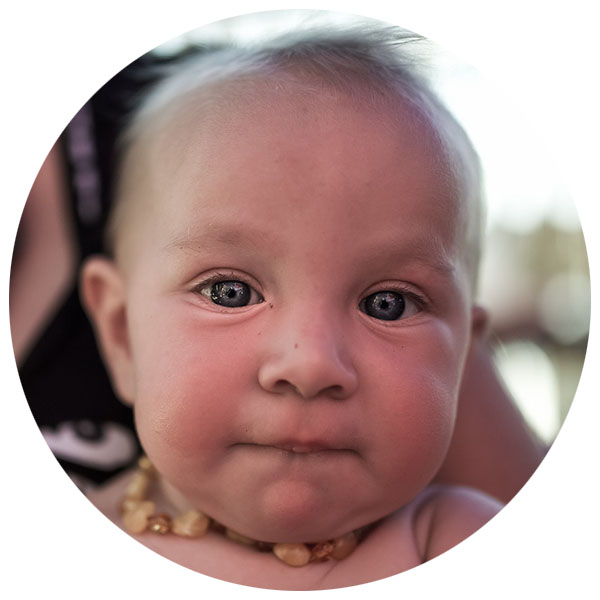 How glyphosate turned food toxicity into a universal phenomenon.

The new glyphosate study is hard to swallow. Food toxicity is a tough topic to digest. To doubt your food provider is to subconsciously doubt your childhood caretaker. Deep in the emotional cortex, the family is the last refuge we can count on. This is why we refuse to believe in the possibility of the unconscious provider who sells us a heart-shaped dream laced with poison, just to nudge up the ROI. Yet we also need a critical, objective evaluation of the food supply system, and particularly some of the chemicals we use to grow food with.

There is a lot of talk about the GMO weed killer in the recent years, but the highlights from the new Glyphosate Study by Food Democracy Now and The Detox Project are in a class of their own. The results are nothing short of a horror drama by the genre’s best-known director, Monsanto. Yet the study is not getting the attention it deserves, just like a dozen previous studies on glyphosate.

Independent, peer-reviewed scientific evidence now shows that glyphosate’s harm to human health could begin at the ultra-low levels of 0.1 parts per billion (ppb). As little as 0.05 ppb of glyphosate causes liver and kidney damage in rats, along with changes in the functions of more than 4,000 genes.

No, that’s not a decimal error.

General Mills, the maker of Cheerios, recommends a 16 gram (.56 ounce) serving size of Cheerios for a 1-year old child who weighs 20 pounds (9 kg). This amount exposes the child to 0.018 mg of glyphosate per day from Cheerios alone. This is nearly double the level that is potentially harmful to human health, especially when a 1-year old child is likely to be exposed to a dozen other sources of glyphosate on a daily basis.

General Mills recently sponsored The Ellen DeGeneres Show in a PR heist known as One Million Acts Of Good, in which Ellen handed the lucky studio audience a $1 million gift with a shining Cheerios smile.

The slogan for Cheerios is “Be Happy. Be Healthy.”

Glyphosate is not just a weed killer. It’s specifically designed to kill any plant it touches, even trees. Today it reaches deep into the human anatomy, all around the world. It’s found in our brains, in our blood, and in our guts.

Glyphosate has the capacity to disrupt the balance of male and female hormones, as well as disrupt reproductive systems. A 2017 study notes the presence of “severe degenerative testicular architectural lesions” in rats exposed to Roundup, the glyphosate brand. There are also studies linking glyphosate to breast cancer, colitis, celiac disease, non-Hodgkin lymphoma, and other forms of cancer in a study published by Scientific American. Repeated exposure to glyphosate also affects our nerve cells and brain functioning, with neurological diseases such as Parkinson’s, Autism, and ADHD.

More than 2.4 billion pounds of glyphosate has been applied to farmers’ fields in the last decade as a result of the widespread adoption of genetically engineered crops. According to U.S. Department of Agriculture (USDA) data, 93 percent of all soybeans and 89 percent corn and cotton planted by farmers in the U.S. are genetically engineered to be glyphosate tolerant. Monsanto’s grand idea with the gene manipulation was to leave farmers no options than to use glyphosate.

In areas that have been subjected to widespread glyphosate-based herbicides (GBHs) spraying, there is also a significant loss of biodiversity and degraded ecological biomass.

“Because glyphosate is absorbed into the plant’s cellular structure in order to kill weeds or unwanted plants, the chemical cannot be removed from GMO crops and other plants by washing, peeling, baking or brewing grains. In recent years, a growing number of studies have found glyphosate in common foods, human urine, breast milk, beer, and 85 percent of tampons,” the study lists. 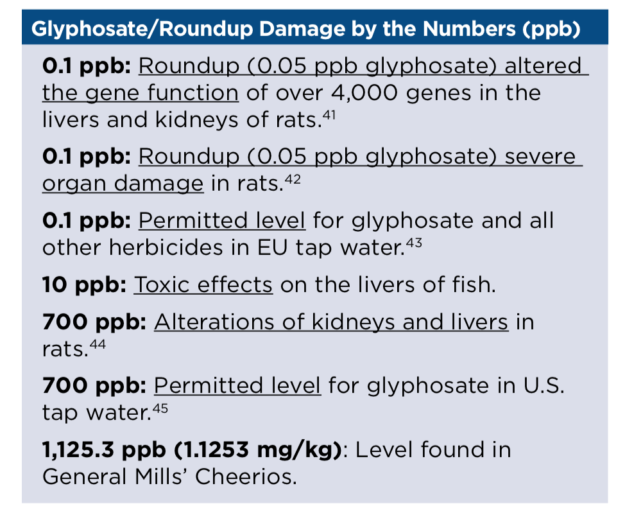 Germany’s Federal Office of Consumer Protection and Food Safety (BVL) determined that the allowable residue level should be set at 0.3 mg per kilogram of body weight, versus the high level of 1.75 ppm proposed by Monsanto and confirmed by its godchild EPA, which is nearly six times higher than acceptable levels allowed in Europe. 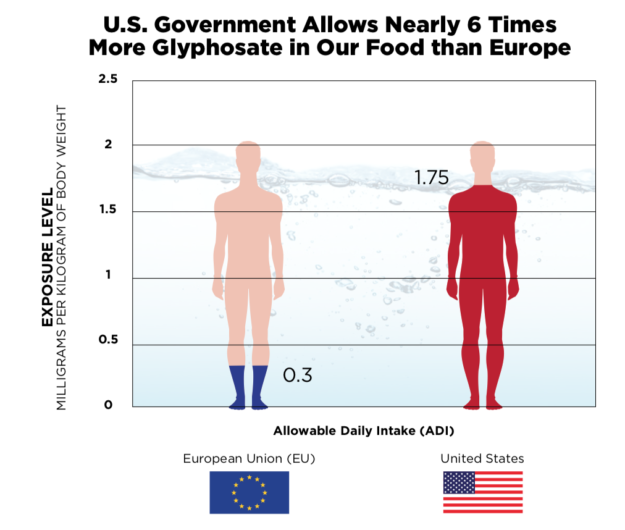 Overall, higher levels of glyphosate were found to correlate with higher levels of chronic disease. “Glyphosate was significantly higher in humans [fed] conventional [food] compared with predominantly organic [fed] humans. Also, the glyphosate residues in urine were grouped according to the human health status. Chronically ill humans had significantly higher glyphosate residues in urine than healthy humans,” revealed a peer-reviewed study published by Journal of Environmental & Analytical Toxicology in 2014.

The average person is exposed to 10 to 13 pesticide residues each day from food, beverages and drinking water, which is why an organic diet can reduce pesticide exposures by up to 90 percent, according to the same study.

A 2013 study by Interdisciplinary Toxicology agreed with chronic disease correlation :

“Celiac disease, and, more generally, gluten intolerance, is a growing problem worldwide, but especially in North America and Europe, where an estimated 5% of the population now suffers from it. Symptoms include nausea, diarrhea, skin rashes, macrocytic anemia and depression. It is a multifactorial disease associated with numerous nutritional deficiencies as well as reproductive issues and increased risk to thyroid disease, kidney failure and cancer. Here, we propose that glyphosate, the active ingredient in the herbicide, Roundup®, is the most important causal factor in this epidemic.”

The authors of the study demand a wider investigation and ban on the weed killer, which we wholeheartedly agree with, beginning with:

Do your own research with independent, objective resources, then share your understanding to people you care about. Meanwhile, maybe best to take the following foods off your favorite list. 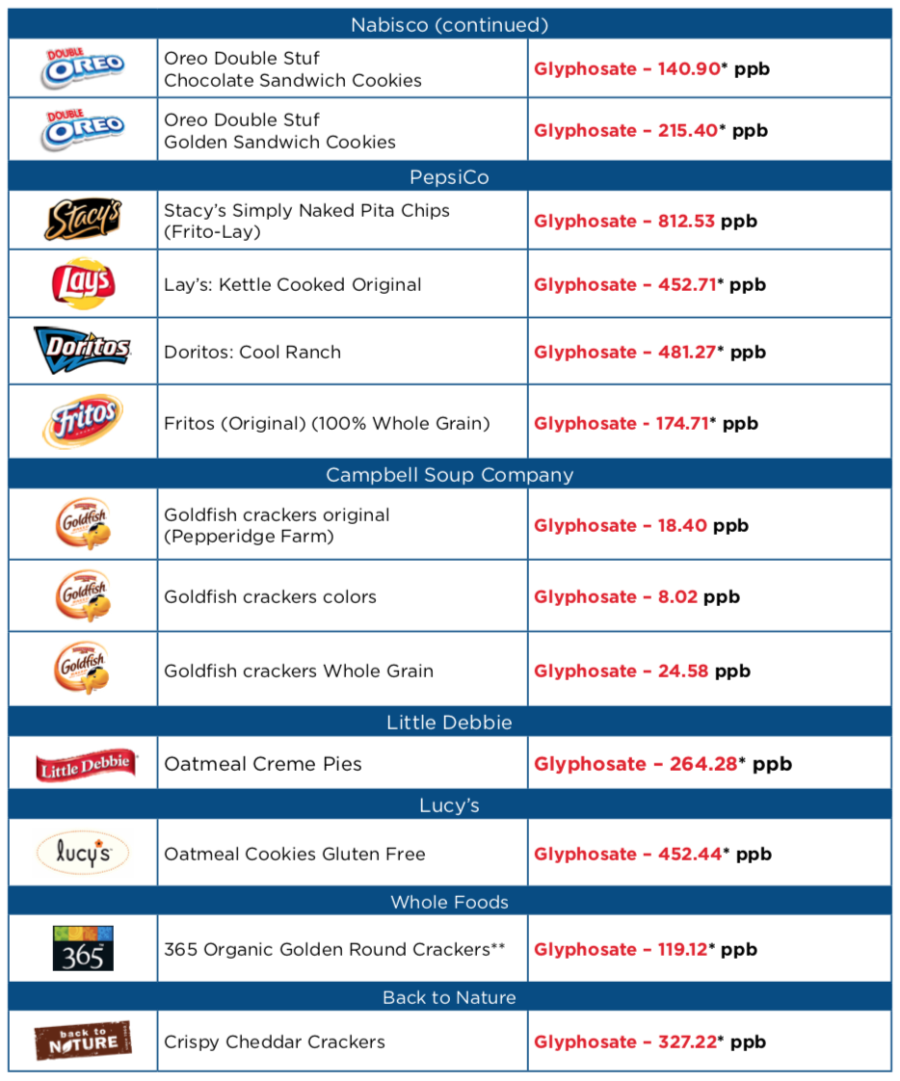 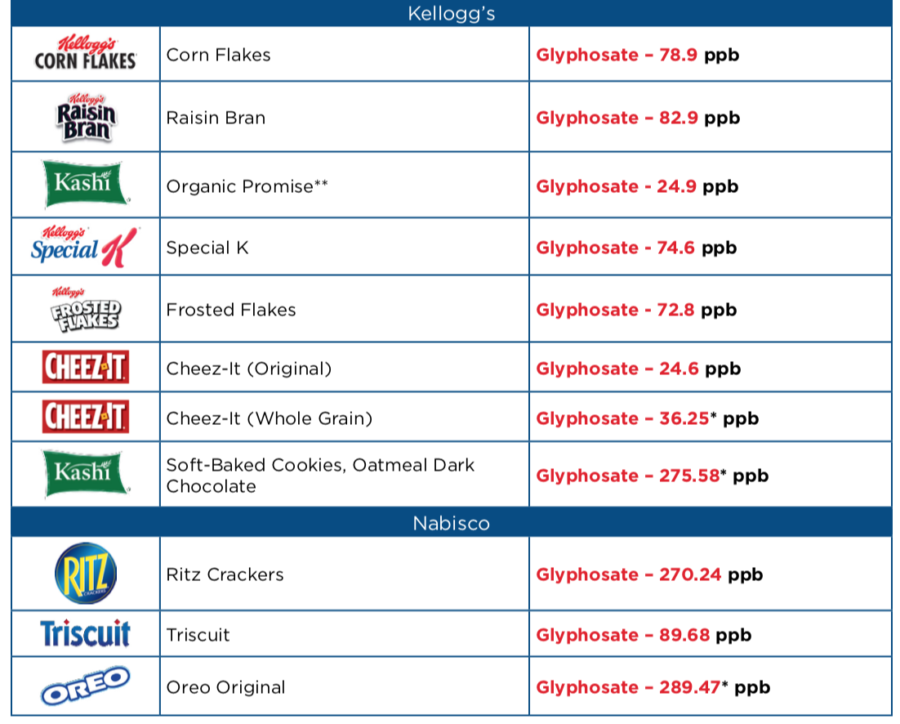 Gallery image with caption: What Can We Learn From The Wolf’s Immune System?

Gallery image with caption: Re-Examining The COVID-19 Narrative: How Does An Arrow Knock Down a Castle?

Gallery image with caption: What Lies Beneath Infertility